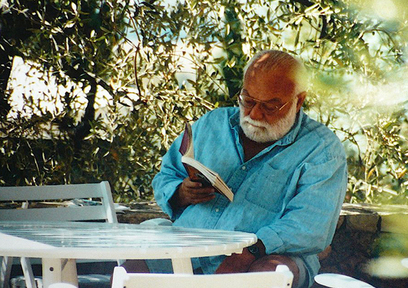 Described by the New York Times as ‘perhaps the last of the great independent producers,’ Saul Zaentz specialized in literary film adaptations that the big studios believed too complex or uncommercial to put on film.

He made intelligent, thought-provoking films that challenged their audiences; and also were top of the class in cinematography, costume and set design, sound and music, as well as acting and direction. In all Saul was awarded three Best Picture Oscars, an achievement shared by only a handful of producers

Saul funded his pictures independently, backed by the jazz music label he managed, Fantasy Records. He was free to choose the artists he thought were right for a story and commit to their vision. When Saul managed the rock band Creedence Clearwater Revival in the mid 1960s, he set up regional music label distribution networks around the world based on relationships of trust and a willingness to share revenues. When he began producing films, Saul would call upon this experience to make independent film distribution deals outside the US.

Saul Zaentz was born in 1921 in Passaic, New Jersey of Russian-Polish immigrants. At the outbreak of World War II he enlisted in the US Army, serving on troop transports in the Atlantic, Pacific and Mediterranean, rising to the rank of sergeant major.

He moved to San Francisco in 1948 and found a job at music distributor Melody Sales. In 1954 Saul was hired by music impresario Norman Granz to manage his Jazz at the Philharmonic tours, and Saul went on the road with the Duke Ellington Orchestra, Dave Brubeck, Gerry Mulligan and Stan Getz.

In 1955 Saul returned to San Francisco where he started at Fantasy Records in sales, building strong relationships with the record distributors he worked with.

In 1962 Fantasy released pianist Vince Guaraldi’s album Jazz Impressions of Black Orpheus. A single from the LP, Cast Your Fate to the Wind, became a crossover hit on the Pop charts, Saul’s first taste of a hit in any medium.

In 1963 Max Weiss, one of the pair of brothers who owned Fantasy, signed a rock band to a record contract, the Blue Velvets, who he renamed the Golliwogs. Saul managed the band, taking out a personal loan to buy them new equipment and a van.

The Golliwogs had never liked their name and in December 1967 changed it to Creedence Clearwater Revival. Fantasy released their first album in July 1968, and the album’s first single, Susie Q, rose to number 11 on the charts.

In 1970 Saul spoke to partner Al Bendich about his wish to produce films. His first film became Payday, from a script brought to him by Fantasy vice president Ralph J. Gleason. Saul co-produced his second film, One Flew Over the Cuckoo’s Nest, with Michael Douglas, and they each received a Best Picture Oscar for it in 1976.

Cuckoo’s Nest, directed by Milos Forman, was a worldwide hit, enabling Saul to produce more films. He next produced the Native American story Three Warriors (1977), and then the animated The Lord of the Rings (1978).

In 1980 Milos Forman saw the Peter Shaffer play "Amadeus" and told Saul he’d like to film it. Saul thought it needed more of Mozart’s character and music, Forman agreed, and Shaffer adapted his own play for the script. At the 1985 Academy Awards Saul won his second Best Picture Oscar for Amadeus.

In the mid 1980s Saul was Executive Producer on The Mosquito Coast, and produced The Unbearable Lightness of Being and At Play in the Fields of the Lord.

In 2003 the British Academy of Film and Television Arts (BAFTA) awarded Saul Zaentz the Academy Fellowship, the highest accolade presented by BAFTA to individuals for their work and achievements throughout their film career.